I am the Domina, you are the customer. I’m the psychologist, you’re the client. I’m your marriage consultant, the symbol of your domineering or harsh mother (whom you desire, but cannot have, for you’re not allowed to touch). But when you experience physical pain your brain releases endorphins and adrenalin and due to the combined effect of these chemicals you feel very much present and alive, and above the problems that usually prey on you. As nature intended. And therefore you spend your lunch hour in my company. After that you go to your office and feel wonderfully relaxed and confident. Happy.

I will never again connect with people on such a basis.

At which I even feel slightly sorry.

SANDRA JOGEVA has performed internationally with the performance group Pink Punk, including at the Judson Memorial Church, NYC in 2003 and Grinnell College in Iowa. And the Cleveland Perfomance Art Festival in Ohio. She has also performed internationally with the performance groups Non Grata and CNOPT and has been included in group shows throughout Europe and New Zealand.

3. “Vox Dei: Karaoke Version”. 2007. ca 3 min.
I was quite interested briefly in religious cults and obscure Christian congregations. A family in southern Estonia tried to save my soul using “speaking in tongues” as their method. My recording is transcribed into the international phonetic alphabet. My intent for it is to be a sort of tutorial for members of those obscure groups who are unable to speak in tongues themselves. I have used this video for several Speaking in Tongues Karaoke performances in Alytus, Lithuania, Berlin and Tartu.

4. “Talk Show”. 2008. ca 7 min.
This is documentation of a performance of the same name I did at the Diverse Universe Performance Festival in Tallinn, Estonia at the Art Container together with the members of the performance group Cnopt. It is a staged talk show, where the special guests (an artist from Bermuda and a genuine child of British 60`s love generation) discuss drugs, parenthood, conservatism and the hippie movement`s ideals.

Under my Skin (The art of Sandra Jogeva) by Marcus Williams

The art of Sandra Jogeva explores the unspoken territory lurking between the sacred and the profane; primordial desire and neurosis: pop culture and eternal time. Hers is an art of extreme juxtaposition; a constant seeking of the impossible confluence between the aesthetics of contemporary consumerist hedonism and atavistic human yearning. A ï¿½worryingï¿½ of the subcutaneous stain of religious history barely hidden beneath a Pierre Cardin jacket.

Excavating aspects of myth, political history and cultural tradition Jogeva consistently manages to plant a seed of nagging doubt; some element of innuendo that things are not quite right.

Performances and social interventions from her collaborative projects in the PinkPunk and AvanGard collectives have made unabashed use of various stereo-typical contemporary signifiers of female sexuality which are clearly disconcerting for the public. Begging for money in ï¿½glammedï¿½ up princess costumes in ï¿½Fair Dealï¿½ the pretty ï¿½twenty something girlsï¿½ hold signs which say Give Us Money We Are Pretty. A simple gesture it seems to make the comment that prettiness is the most important qualification for women in a culture inundated with imagery portraying endless variations of ideal feminine beauty. Yet belying the impression of simplicity, the begging action suggests that prettiness isn’t really a worthy qualification; more a condition for evoking sympathy, charity and the male desire to protect.

‘I Could be your Motherï¿½ has two women dressed up in provocative outfits which are a hybrid of hooker, power dressed female executive and exotic, urban bird. Chasing people in the street and blasting them from fake lactating breasts accentuates the allusions to maternity in the title of the work. This satirical gesture takes a jab at the undervaluing of motherhood in contemporary capitalist society particularly in the deliberate blending of a ï¿½Cosmopolitanï¿½ magazine perception of female sexuality and ï¿½Sex in the Cityï¿½ thirty-something careerism; both at odds with the demands of motherhood, exemplifying this very twenty first century evolutionary dilemma. Complaints about milk stains on expensive business suits translate as the thinly disguised fear of sublimated oedipal emotion. For the wearer of the suit, both a powerful signifier and a signifier of power, becoming victim to an attack by an assailant who is dressed as your corporate adversary, who uses the very essence of maternal succor as a weapon and is sexually dynamic all at the same time, expose a deep unease.

Recent solo works move away from the public domain into more private emotional territory. The confused pity evoked by glamourï¿½s puppets begging or the sublimated oedipal terror of the maternal slut shift to a deeply internal anxiety. ï¿½Last Time I fell in Love with Somebody, I Developed a Rash from the Nervous Tensionï¿½ is somehow evocative of medical journal photographs of emaciated anorexia victims; wasting away in a hopelessly deluded quest for the ultimate body. Concomitantly the rash seems to be the neurotic by-product of loves unattainable standards, yet without which, for the girl peering out of the photograph; sickness prevails.

ï¿½Guestbook of the Heartï¿½ reveals an unfulfilled quota; another failure the marked body is a vessel waiting to be filled. All pleasure in the young womanï¿½s body seared by the stark bovine brand.

Marcus Williams is an artist, curator and Associate Professor of Photography based in New Zealand. 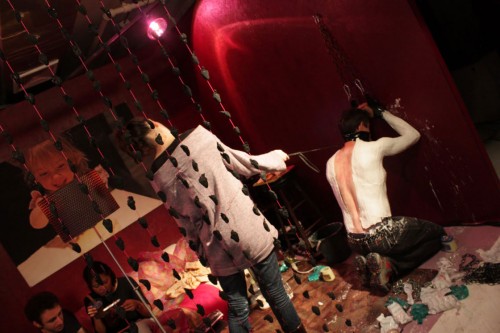 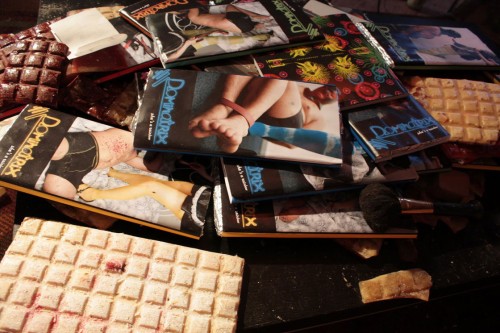